Welcome to our Skiboards Museum! We started our business in 1996, right when skiboards first hit the scene (well almost which you will find out more about). This amazing sport of skiboarding has a 23+ year history. For those of you who started out in the early years, just a refresher, for those new to skiboards, always good to know the history of the sport. To this day, though skiboards is the official term, people still refer to them as skiblades, snowblades, shorties, funskis, microskis and blades.

Developed originally by skaters to transfer skills to the slopes, many start up companies began creating their own models of skiboards including Canon skiboards, Line skiboards, Klimax Skiboards, Journey Skiboards, Odyssey Skiboards, Snowjam Skiboards, Groove Skiboards and Microski to name a few. Then other companies came along including Journey skiboards with custom hemp top sheets and twin tip, wood core design.

A host of larger ski manufacturers jumped on board around year 2000. These include:

A Brief History of Skiboarding

The origin of the sport of riding these shorties can be traced to the introduction of two products – first, the Big Foot by Kneissl and second, the Figl by Atomic. Both were designed to make riding on snow easier. In the case of the Big Foot, complete with toes and a designated right and left foot, these were made with factory mounted, non-release composite 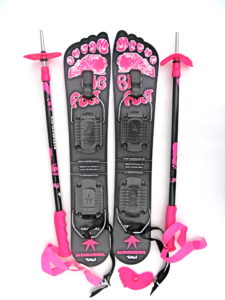 bindings that fit regular ski boots. Big Foots were 65cm in length and constructed with a foam core. These were first introduced in the mid-1970’s and sold every year

up until 2007 when they were discontinued. Estimates are that over a million pairs were sold throughout the world.

In 1982, Atomic introduced the Figl at 63.5cm. The Atomic Figl featured factory mounted, composite bindings and were made with a foam core as well, along with sintered bases and Rockwell steel edges. These were designed specifically for European mountain climbers to ride the glaciers back down after climbing. They were also used by those who wanted to “ice skate” on the frozen lakes. There were not many other similar products introduced until the late 1990’s, allowing the Big Foot and Figl to basically dominate this specialized market.

Around 1997, these short skis began to surface with new, innovative designs by a few pioneering companies. Companies like Canon, Line, Groove, Microski and Klimax began producing their own style of unique short boards.  Klimax  two models, a twin tip and a fantail (the only one made that handled superbly for

Kent Keiswieller, the designer of Microski, actually created his Microskis by modifying a snowboard construction. Eventually, Keiswieller designed the MicroSki at 68 cm with factory mounted non-release bindings. These rode similar to Big Foots, but without the toes, more side cut and improved flex (Big Foots do not flex). Microski had their Orbit, Extreme and Venture models with wood core and plastic bindings. The appeal of “short skis” was that they were simpler to learn how to ride on snow. Many customers remarked on how similar they were to skating. On these, you could make quick turns, fast stops and be in control. As a result, many skaters of all types began to get interested in riding them. Beginners found a tool to learn to ski quickly, thus allowing them to explore the entire mountain with less fear and more confidence, while sporting a huge smile on their face.

In Feb. 1998, the official term “skiboards” was established. The term was determined based on the construction and use of short skis by the existing manufacturers at that time. Skiboards were made to carve on edge like snowboards with parabolic twin tip shapes, yet since they were made in pairs – one for each foot – they were also like skis. Some people still spell them “Ski Boards” as a result. Skiboards.com was born (prior to that we called ourselves “Powderskate”.

With the start of the 1998-99 Season, many new skiboard manufacturers emerged such as Journey, Salomon, Fischer,

Atomic and Blizzard. Line, Microski, Groove and Canon were also introducing additional new innovative models as well. Much experimentation was going on in those days with differing side cuts, construction, shapes and bindings. It was at this time that manufacturers began to incorporate four stainless steel inserts in their skiboards. This allowed interchangeable higher performance non-release bindings to be used. For example, Line introduced their CAM and Pro model bindings, all aluminum bindings that would mount to any four hole mounting pattern (40mm X 40mm).

At this time, the Atomic Figl was renamed to the Maxicarve, but remained identical to the original Figl. Dynastar also

entered the market introducing their 85cm and 99cm wide body short skis with wood core and new four hole mount non-release bindings with built in risers. Dynastar skiboards were popular due to their wide body construction, though the bindings did not provide proper power transfer, resulting in poor carving ability. 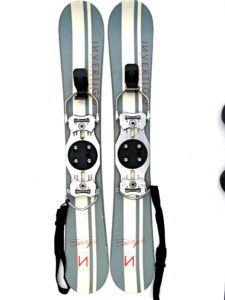 Groove made a number of models with wood cores, twin tips and non-release bindings. This was a popular company with great skiboards that performed. Canon as well came out with numerous models, their special Thias binding for ski boots. They specialized in wide body twin tip designs as well and did quite well in the growing sport of skiboarding. Atomic introduced their AR model which again was wood core, twin tip with non-release ski boot bindings. These were quite popular for the time.

More manufacturers jumped in the market in the 2001/02 season, including Head. Head introduced the 94cm Headliner, a wood core asymmetrical twin tip with factory mounted Tyrolia Sympro 4 bindings, the first step-in, release bindings used on skiboards. This particular model of bindings though was intended for junior skiboarders and not adults with larger boot sizes. That has since changed and now they are made for adult riders. These release bindings also added significant weight (but not more than the Bomber bindings). Over time, as the sport has evolved, more skiboards were mounted with release bindings. This dramatically increased the safety factor. It was also easier to get into and out of the bindings. In fact, ski-type release bindings have come a long way in general. These now allow for maximum flex, are easy to adjust and are much lighter. While skiboards can still be mounted with non-release bindings, the trend has gone towards release bindings because they perform just as well.

The bindings produced by the major ski companies, such as Atomic, Salomon, Tyrolia, Rossignol and Elan, are tested, reliable and certified to perform. They will not release prematurely, but will release when you need them to. 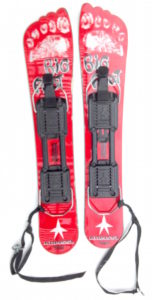 Many of the smaller as well as some of the larger manufacturers have dropped out, including Salomon, Line, Groove, Canon, Alpina, Dynastar, Journey, Microski and others. The reasons for this are diverse, but often it’s due to their cheaper construction (trying to make a buck at the expense of performance). For example, Salomon’s snowblades were made with foam cores and a narrow width construction. These were great for groomed runs, but not great for speed or powder. As a result, skiboards got a bad reputation as being wobbly, and being only for beginners. The sport has come a long way from these early years. Companies such as Head, Elan, Atomic, K2, Snowjam and others are producing skiboards and continue to stretch the envelope of the sport.

In addition, seeing the need for higher performance skiboards, I created my own company in 2002, Summit Skiboards. I began producing various models to further expand the terrain and conditions that skiboards could perform on. I should also mention that Summit Skiboards are manufactured in an environmentally friendly way, including solar energy, recycling and the latest technology for enhanced efficiency. It’s one of the leading green energy plants in the world.

The history of this sport though is still being written, and you’re part of it. New territory is always being explored, including new construction and designs. While some may say the sport has come and gone, mostly this is from those who have not really ridden high performance skiboards. Even more so, many manufacturers who produced cheaply made skiboards found customers did not like them. They assumed that this meant the sport was dead, whereas, I see it as customers really wanting higher performance from their skiboards and exposure to a new form of snow riding.

As you’ll see, the ski industry is stuck in its own paradigm, making decisions based on the bottom line, rather than the fun factor. From their viewpoint, profit, skiboards are no longer a wise investment. As a result, they may say that skiboards are no longer part of the sport of snow riding. So be it. Don’t need them anymore. Skiboards provide fun, and immediately break you through the existing limitations imposed by all the shoulds of skiing. As long as skiboards are being made, people will want to ride them. Instant skiing – instant fun!

A little flashing back to 1982 when Richard Gauer come out with Gauer skiblades. He was a skier and an ice skater. He began testing

some new ideas that he would bring to the local ski slopes at Hidden Valley Ski Area, Vernon NJ. The International Ski Dance Association was started and skiers popped up all over the various ski areas with these new short skis. Pretty soon SkiDance competitions were held everywhere. You may remember hearing music playing on the slopes and seeing some competitions at the Vernon Valley ski area as well as at several other ski areas.

Follow a few links to read more about some of these truly great models of skiboards once all the rage and might still be available in various online stores, ski shops and people’s garages to this day. 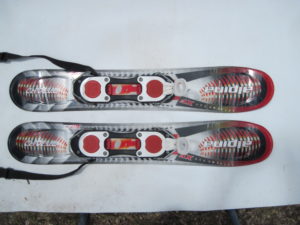